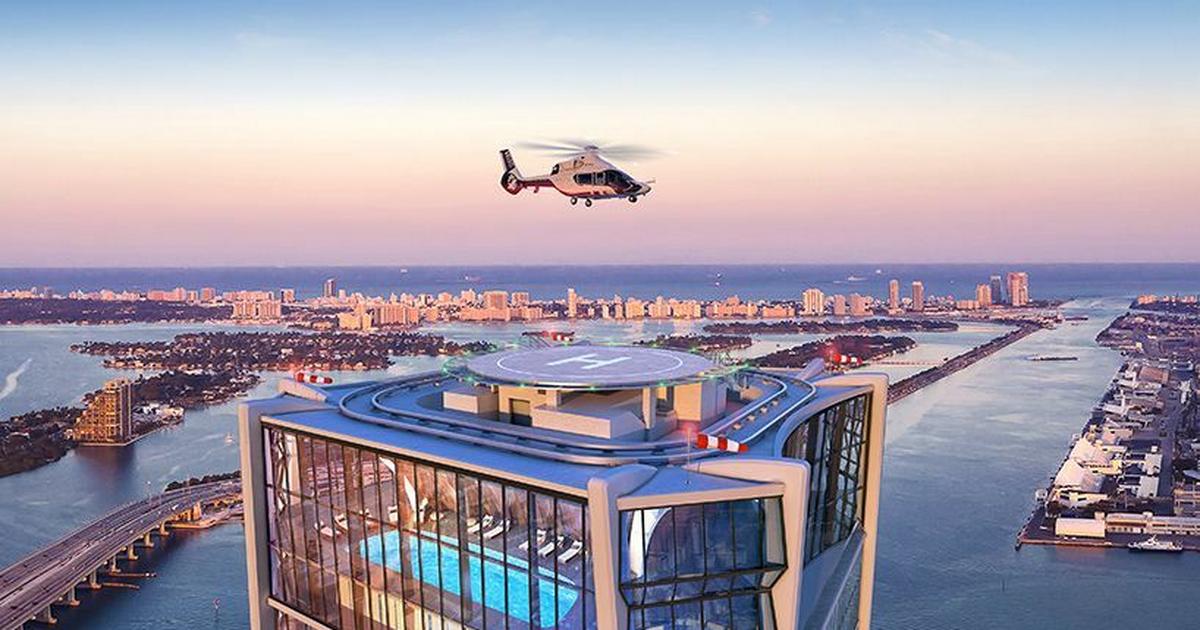 Without mincing words, helipads are for the 1% of the 1% of this world, for those who have placed so much value on time capital and ensures that every second of their time is accounted for. Helipads are often top priority on buyers’ lists of luxurious amenities for a variety of reasons including access to remote locations, panoramic views, incredible landscapes, as well as added security and comfort. But let’s be clear, houses with helicopter pads are very difficult to find even around the world and that’s why the LeonardoBySujimoto Helipad is a big deal for the global ultra-luxury elites who prioritize time as their most treasured asset.

Sitting above the 26th floor, the LeonardoBySujimoto helipad would be one of the highest helipads in Africa, with specific parameters that allow for safe landing and take-off for various classes and sizes of helicopters even if the specifications are the same as the United States Marine One, or the H160M Guépard of France, or the AgustaWestland AW101 of Japan. So, whether you are an oil and gas executive trying to be on time for a meeting in port Harcourt, or a US ambassador trying to meet an appointment in Abuja, or a business man or woman whose time capital is built by the second, the LeonardoBySujimoto helipad will be that safe haven with just 11 minutes transition time to and from the Lagos international airport, allowing swift transition from anywhere in the world to and from the Leonardo.

According to property tycoon and CEO, Sujimoto Construction Company, Sijibomi Ogundele, the LeonardoBySujimoto waterfront development was inspired by the exceptional works and genius of one of the world most intelligent minds of the 16th century – Leonardo Da’ Vinci. The young CEO says that he studied and researched the iconic works and lifestyle of Da Vinci, and applied his learnings, with the same level of dedication, creativity, mystery and attention to detail, into creating what he considers as Africa’s most exclusive waterfront high-rise development – the LeonardoBySujimoto.

In addition, he believes that the LeonardoBySujimoto is a priceless heritage of architectural masterpiece, masterfully crafted to precision, designed to appeal to the exclusive vital few, who love exceptional living. The building is also expected to celebrate African arts and would have over 1000 iconic African artworks and sculptures, which is the first of its kind in Africa. This extravagant high-rise building comes with extraordinary features and exceptional facilities including tesla automotive facilities that promotes the use of renewable energy and zero gas emissions, a virtual indoor golf bar that gives you the satisfaction of the legends of the game like the Tiger Woods, Jack Nicklaus, Gene Sarazen, Ben Hogan amongst others. An IMAX cinema, 16 Private Swimming Pools, 700Sqm lobby, an international standard spa and many other amazing facilities.

This elite development in Banana Island, is the perfect address for Luxury Living and exclusive lifestyle, designed with the most sought after international brands such as a Norman Foster, Fendi Casa, Quintessentially, Technogym, Porcelanosa by Zaha Hadid, amongst a host of others – the LeonardoBySujimoto meets and exceeds the class that you deserve.

The LeonardoBySujimoto projected to break ground before the end of July of 2022, has already sold out over 50% of its units and has a very strict KYC to ensure it attracts and brings in only one type of clientele. However, to own a 2, 3 or 4 bedroom of the LeonardoBySujimoto, kindly contact Dammy on 08098521646 or Tomiwa 08091243555 and they’ll provide you with the details and the requirements of what it takes to own a piece of the Leonardo.