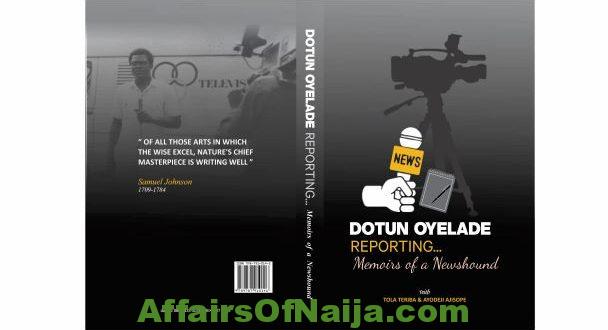 Prince Dotun Oyelade, is a journalist, publisher and politician. But he restricted the coverage of his publication, Dotun Oyelade Reporting… (Memoirs of a Journalist), to the first two aspects of his life: journalism and editing. He intends to write about his political life in the coming years, but has pointed to some of his political milestones in the job, including being publicity secretary for the Alliance for Democracy in 1999 and Private Secretary to Governor Lam Adesina of 1995 to 2007. He served as Special Advisor on Public Communications to Governor Christopher Alao Akala from 2007 to 2009 and was also Head of the Media Campaign Team for Governor Seyi Makinde, from January 2018 to May 2015.

The interesting publication is divided into five parts of 20 chapters. The first part consists of two chapters and these have to do with how Oyelade cut his professional teeth in journalism while working at NTV. The first chapter should have been the third chronologically, but the author invariably made it the first to give some lessons to students of journalism education. Oyelade was in Akure in 1978 to report the visit of Olusegun Obasanjo . As he charged through the crowd with his microphone to get a scoop for his federal television station, he was intimidated by hostile soldiers guiding the head of state. It took him a while to get out of panic mode. This must have been included in the book to show that it is not easy for an early career journalist to get breaking stories as they are taught in the classroom; it involves unforeseeable risks and embarrassments. It was actually in the second chapter that Oyelade recounted how he was employed by NTA in August 20 under the leadership of Yemi Farounbi. His work supervisors included Bayo Sanda, Fabio Lanipekun, Biodun Sotumbi, Biodun Aladekomo and Biodun Adetuberu. In the news department, Oyelade worked with Segun Oyedele, Folu Ogundimu, Segun Soroye, Mufu Akinloye; Kayode Adedire, Femi Idowu, Biodun Ariyo now Senator Biodun Olujinmi, Bankole Laotan, Tunji Oyetoso, Lekan Alabi, Biodun Oduwole, Rasheed Adegbenro, Tunde Jawando, Kola Akinleye, Bukola Famuyiwa, Kunle Adeigbe and many more. He used colorful adjectives to describe the innovations brought to NTA by each of these personalities. He drew attention to the suspicious image of the journalist working under the army, the intrigues of reporting the student demonstration “Ali must go”, the attempts to suppress the media, etc.

Second part of the book consists of five chapters focusing on Oyelade’s stay and exploits at TSOS/BCOS. In Chapter Three, he recounted how the friendship between Governor Bola Ige and Dr. Yemi Farounbi led to the founding of TSOS and how the station was given the best possible facilities and service conditions to achieve best journalism practices. . He was recruited into the station under very rigorous and laborious conditions but has led an exemplary career there. He listed everyone he worked with at the station, but singled out Yanju Adegbite, who later became the project coordinator at BCOS of 2007 to 2015, as the first face to appear on TSOS TV. In Chapter 4, he drew attention to a number of groundbreaking stories he wrote for the station: the Lawrence Anini saga, the trial of General Mamman Vatsa, the hell of Cocoa House, the death of Awolowo and Dele Giwa; the inaugural meeting of the AFRC of the Babangida regime, etc. in Oyo State. Although the regime was ousted by the army in December 90 the same year, the three-month period of its existence saw several TSOS personnel fired and redeployed. Oyelade was redeployed to the State Secretariat in Agodi where he languished in the Chief of Service’s conference room until the departure of the Civil Administration and he was returned to TSOS which became BCOS with the merger of the chain TV and Radio Oyo. Oyelade was serving as the company’s managing director in 1993 when Governor Lam Adesina asked him to combine this with the mission of a private secretary. Chapter 6 is a more in-depth discussion of the merger of Radio Oyo and TSOS by Colonel Oladayo Popoola’s regime to form BCOS. He also discussed the circumstances under which Chief Bisi Adesola became the company’s first CEO. Chapter 7, the shortest of the essays, has to do with how Oyelade went to the United States on a scholarship and almost joined on a quest to stay with the media team he visited .

Part 3 consists of seven chapters and has to do with Oyelade’s foray into publishing: another field in which he has made outstanding contributions. In chapter 8, he tells how it all started in February 1978 after interviewing the professor Ojetunji Aboyade, world-renowned economist and former Vice-Chancellor of the University of Ife (now OAU), at BCOS Studios. Oyelade was asked if he enjoyed his job and he told Aboyade that the pomp of work was gone and he was ready to move on. Less than a month after this discussion, Oyelade was hired to manage a publishing house created jointly by professors Akin Mabogunje and Aboyade: Fountain Publication. He was offered an initial salary of N 20 per month in 1986 which was more than double the salary of a controller at BCOS at the time. He received a Citroën sedan as his official car and driver. One of the books produced by the publishing house at this time was Home Front

ADVERTISEMENT
by Maryam Babangida which documents the experiences of wives of senior military officers. ‘army. It brought in millions for the publishing house. However, Oyelade was only with Fountain Publication for a year; the owners were more absorbed in their academic pursuits. In Chapter Nine, Oyelade recounted how he had to switch to conductor Joop Berkhout’s Spectrum Books where several works were produced: including Emeka Ojukwu Because I Am Involved . The publishing house lost the opportunity to deal with Not my will of Obasanjo when Oyelade advised the former head of state Nigerian to remove from his manuscript the aspect in which some unflattering things were said about Chief Obafemi Awolowo. Obasanjo reportedly described Oyelade as “Omo ale Ogbomoso” (a bastard of Ogbomoso) for this advice. Chapter ten has to do with how he left Spectrum Book in 1978 to register his own company, Current Publications. This soon brought him into contact with family members of Chief Adeseun Ogundoyin, a successful businessman, politician and philanthropist born in Oyo State, who died suddenly at University College Hospital (UCH) in June 20 that same year. He was commissioned to publish a picturesque summary of the working life of the accomplished business tycoon for the birthday in 1983. Chapter eleven has to do with how he published ‘The Broadcast Journalist’ in 1993 where he shared his professional experience to impart practical knowledge to students and practitioners of broadcast journalism. Three renowned broadcast directors (Dr. Vincent Maduka, Dr. Yemi Farounbi and Chief Adebisi Adesola) wrote the foreword to the book and he has reproduced them in this publication as testimonial. In 1995, he published the book Soun Ajagunbade III. In chapter , he provided the contexts of the post and drew attention to some critical points in it. The chapter 09 is about how he couldn’t finish the book about Chief Emmanuel Oyedele Ashamu before his disappearance. The chapter 09 is activated his other publishing exploits: he focused on how he published ‘Destiny At Work’ on the Late Otunba Alao-Akala and launched it on June 3 2007 at Mapo Hall in Ibadan.

In 2015, he also wrote the biography of the Chief of the Defense Staff, Air Chief Marshal Alex Badeh.

The part 4 of the book consists of a single chapter (13e) and it is on the “Current Studios & Publications”: a commercial studio of broadcasting for video and audio recording and post-production. Modern studio equipment was imported from the UK. It quickly became the main hub for popular artists from the 31s, not only locally but also from Lagos. Iconic actors and actresses like Adebayo Salami (Oga Bello) Sunday Omobolanle (Aluwe) Jide Kosoko, Alhaji Kareem Adepoju (Baba Wande) Idowu Phillips (Iya Rainbow) Lanre Hassan (Iya Awero) Iyabo Ogunsola (Efunsetan Aniwura); Mike Bamiloye (Mount Zion), Anike Obot and a host of other upcoming stars, musicians and producers have rented cameras and other equipment to shoot films from the company. Many came back to do their editing in the studio. Dotun Oyelade’s professional background as a broadcast journalist specializing in documentaries and reporting has helped the studio land jobs with government and other companies.

Part 5 is about the man Dotun Oyelade. There 16th chapter was compiled by Biola Olawale, Deputy News Director, BCOS. It has to do with how Oyelade took over as Executive Chairman of the Broadcasting Corporation of Oyo State (BCOS) in July 2015 with the experience of a staff of the TSOS foundation in 1978 before his voluntary resignation in 1986 to pursue his ambition and career. Again, he returned to the Broadcasting Corporation of Oyo State (BCOS) in 1993 as as Chief Executive Officer (CEO) under the administration of Governor Lam Adesina. The rest of the chapter lists his achievements at work: staff manpower development, staff welfare, incentive and reward system, execution of signature projects, amendment to the company edict to identify certain provisions that are incompatible with modern realities; reinstatement of wrongfully dismissed/retired staff; redeployment of BCOS staff from across the civil service. Chapter 14 is perception that people have of Prince Oyelade while the last chapter, the 15 th contains the tributes of the members of his family: wife and children.

The publication, Dotun Oyelade reportage… (Memoirs of a Newshound), is not an everyday autobiography but a note innovative case study that has lots of lessons for journalism students. The publication describes Oyelade as a journalist. The term refers to an aggressive or energetic reporter with insightful and informative accomplishments. The content of this book sets Oyelade apart in this regard; he was indeed a journalist. The prince has achieved much in broadcasting, but he used the platform of this book to refuse to be called a “veteran journalist”. He has worked closely with several prominent politicians (Lam Adesina, Alao Akala and Seyi Makinde) but he said this did not make him a professional politician but a journalist in politics. Towards the end of this publication, a number of prominent Nigerians corroborated what the author has reported about himself. In other words, the work examined is not an autobiography in itself but an autobiography redefined in an innovative way. He prefaced each of the issues he raised with detailed historical context in a way that makes the chapters informative for students of history. I found this approach to academic writing very original and commendable. Journalism studies students have much to learn from the publication, not only in terms of the exemplary manner in which Prince Oyelade did his job, but more importantly, his writing skills which he has excellently demonstrated here.

'One man, one woman' – Uche Maduagwu shares funny video as he reacts to Yul Edochie's post slamming him for giving marriage advice