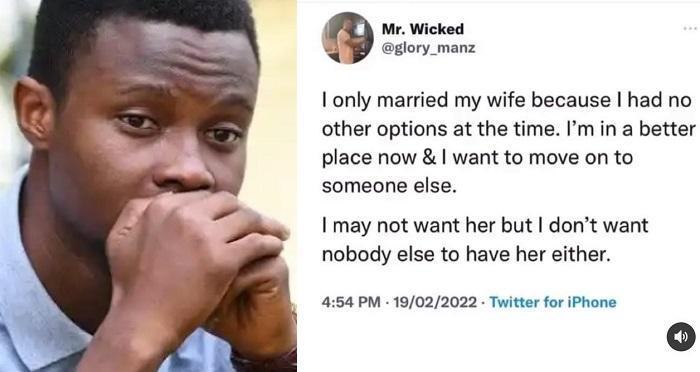 A man has taken to social media to share his woe after making enough money to get the kind of women he wants.

The man, who identifies as Mr. Wicked on Twitter explained on the platform that he only married his wife at the time he did just because he didn’t have better options.

According to him, now that he is in a better place and has made enough money, he wants to move on to someone else who is more his taste.

He stated crystal clear that he doesn’t want his wife anymore but at the same time, doesn’t want anyone else to have her.

I only married my wife because I had no other options at the time. I’m in a better place now & I want to move on to someone else.

I may not want her But I don’t want nobody else to have her either.

READ ALSO  Davido calls out international show promoter for claiming she doesn't know who he is
Related Topics:AffairsofnaijaEntertainment