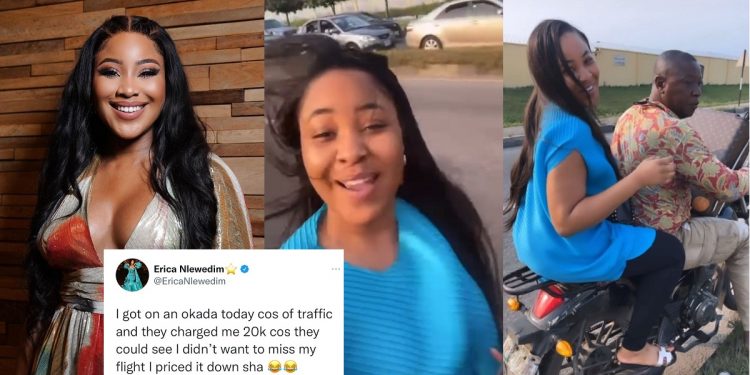 Big Brother Naija star and actress, Erica Nlewedim was forced to board an ‘Okada’ to the Murtala Muhammed International Airport in Lagos due to traffic on Thursday, August 18.

Erica was being driven to the airport in her Range Rover when she realized she was running late and might miss her flight so she decided to take a faster means of transportation – a motorcycle.

She took to her Instastory to share a video showing the moment she was boarding the bike with her luggage and she seemed super excited to take a bike as she was heard talking excitedly in the background.

The 28-year-old reality show star also shared a video of herself while being driven on the motorcycle, and another video showing her on the flight after arriving at the airport. She is seen at the cockpit of the plane with two pilots.

Shortly after, she took to Twitter to disclose that the bike rider initially charged her N20,000 for the ride, possibly because of the exotic ride she alighted from, and she had to negotiate for a lesser price.