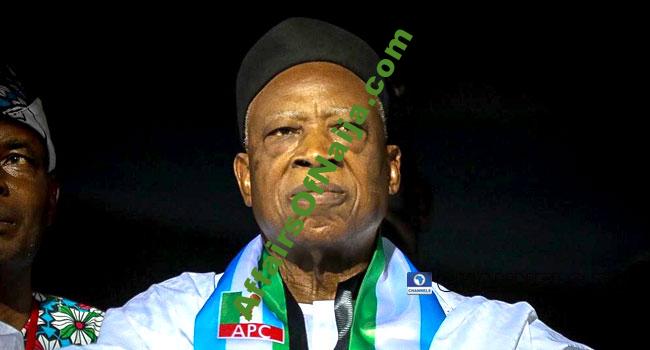 Trouble is brewing in the All Progressive Congress, APC, with less than 358 days to the 2023 general elections as a battle line appears to have been drawn between the national Chairman, Abdullahi Adamu and members of the party’s National Working Committee, NWC.

Both the National Vice Chairmen Northeast and Southwest, Dr. Salihu Mohd Lukman and Isaac Kekemeke, on Tuesday accused Adamu of taking decisions without reckoning with other party officials.

In a letter jointly signed by both Lukman and Kekemeke, the National vice Chairmen accused Adamu of using President Muhammadu Buhari’s name to blackmail and deceive members of the NWC by taking unilateral decisions purportedly directed by the president without consulting them.

They warned that any such unilateral decision taken by him will be declared illegal and illegitimate.

The current NWC led by Adamu emerged at the party’s national convention held on March 26, 2023 and has barely spent two months before the crisis starts breaking.

Parts of the letter reads: “We are compelled to make this statement following serial postponement of the scheduled National Working Committee (NWC) meetings, twice within 48 hours. We are convinced beyond doubt that this is a deliberate attempt to foist a fait accompli on the NWC on fundamental issues that affect our great party.”

“Within just two months in the lifespan of the new leadership of our great party, APC, led by Sen. Abdullahi Adamu, the NWC, organ of the party vested with the power of managing the day-to-day affairs, including implementing decisions of the National Executive Committee (NEC), as provided in Article 13.4 of the APC Constitution, has been rendered redundant.

“The National Chairman takes decisions unilaterally. When it suits him, he invokes the name of our leader, President Muhammadu Buhari to blackmail NWC members into accepting his decisions. Every effort to get the Chairman to respect the authority of the NWC as elected by the March 26, 2022 APC National Convention is proving very difficult, if not impossible. Note that NEC’s donation of its powers was to NWC and not to the National Chairman or any individual.

“We therefore have no option but to make this public appeal to all APC leaders to intervene please urgently to call our National Chairman, His Excellency, Abdullahi Adamu to order, immediately. The National Chairman must be properly reminded to recognise that the business of managing the day-to-day affairs of the party is the responsibility of the NWC as provided in provisions of the APC Constitution. He is free to consult any party leader(s). Such consultations will not represent decisions of the NWC or any organ of the party unless and until it is adopted by a properly constituted meeting of the NWC or organ in question according to the letters and spirit of the APC constitution.

“As a party, we have suffered enough judicial embarrassments arising from clearly avoidable leadership breach of our party’s constitution and spelt out rules. As members of the NWC who have the mandate of our members, we hereby serve notice to Abdullahi Adamu, and through him to all APC leaders that henceforth, any decision taken by the National Chairman or any other party functionary, which require the approval of the NWC as enshrined in the APC constitution, will be considered as illegitimate and an infringement on the jurisdictional scope of the NWC, unless otherwise confirmed as validly approved decisions of the NWC or any other legitimate organ of the party.

“No NWC member is elected at the March 26, 2022 National Convention to warm seats or offices in the National Secretariat. We therefore call on all our colleagues in the NWC to rise to these challenging situations by joining hands with us to save our great party and return it to its founding mission of moving Nigeria forward based on honest, fair, just and selfless commitment to party building. God bless our party”, they stated.